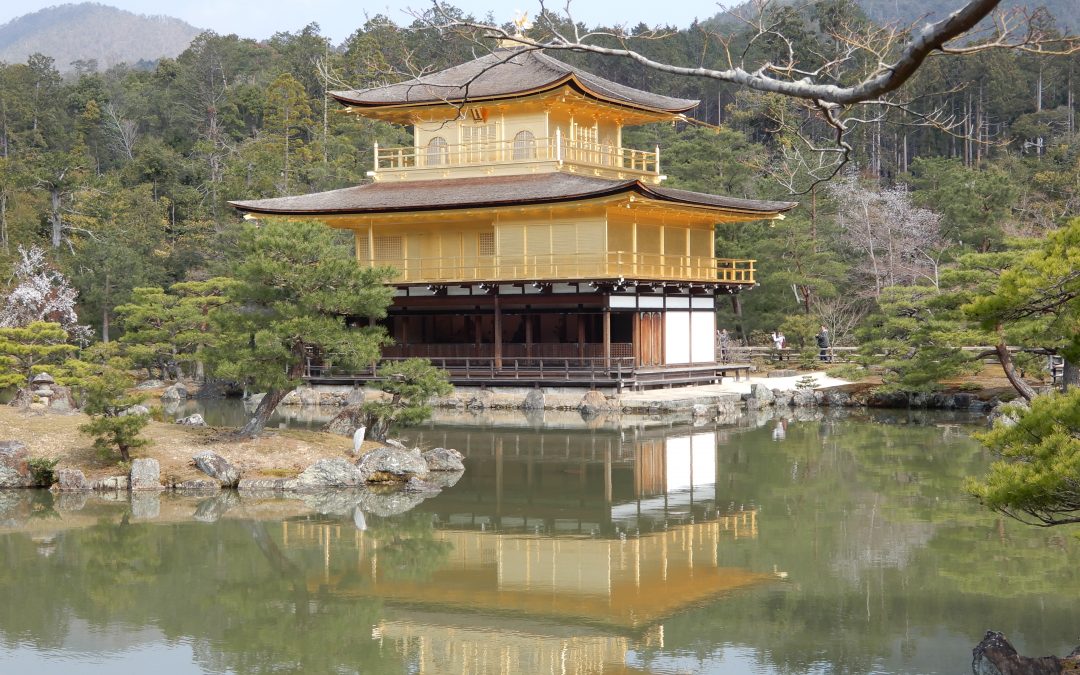 I think Kyoto is my favourite Japanese city. It just has so much going for it. I love how there are so many traditional Japanese shrines and homes still there but many modern buildings as well. The hotel we stayed at in Kyoto was the Hotel Resol Kyoto. This hotel was very new and I can’t say I would ever recommend it. It looked nice, the rooms were small, but all the rooms are small in Japan. The issue was that it wasn’t efficient. The designers of the hotel decided they wanted to put form over function so the rooms had fake tatami mats, small windows with Japanese rice paper coverings and the lighting in the room was really poor. There was no desk space and if you happened to be two people sharing a room there was also no place to put suitcases or clothes. It looked nice!! It just didn’t work to actually live in the room if you were there longer than 1 night. We were there for 5 nights so I found it to be a challenge and left a not so great review on TripAdvisor. For comparison, Karen and I actually stayed in places that had even smaller business hotel rooms and they were small but efficient, didn’t look as nice but you could actually live in them.

Our first stop of the days tours was to the Golden Pavilion and oh was it CROWDED! There were so many people there that you had to jostle to grab your pictures. The Temple was beautiful, and I am really glad I saw it in person however given the incredible amount of people there (and we got there right when it opened), this is not a place I would bother going back to. It was so busy you could barely walk along the paths and you defiantly couldn’t stop or you would be crushed from behind. 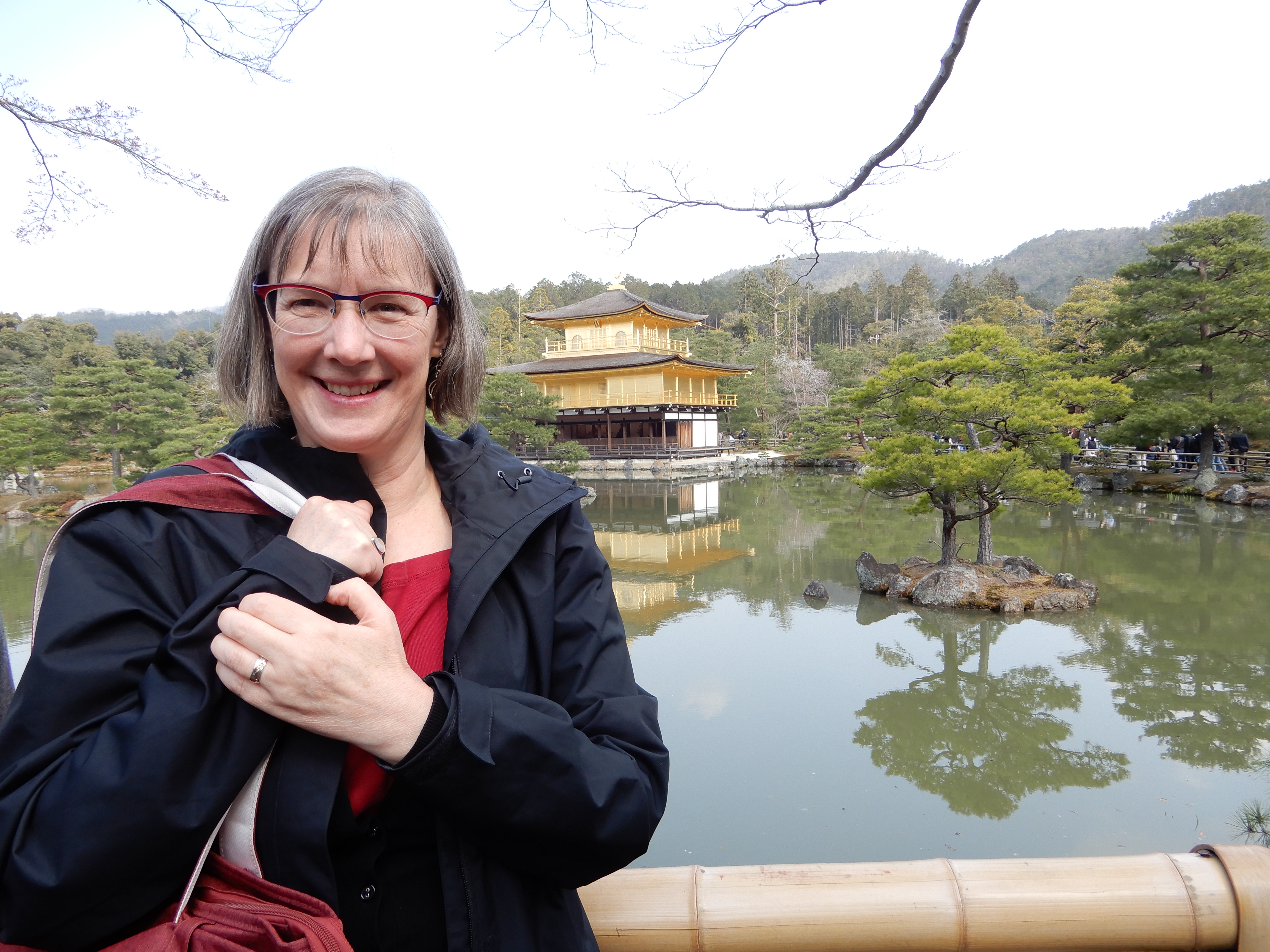 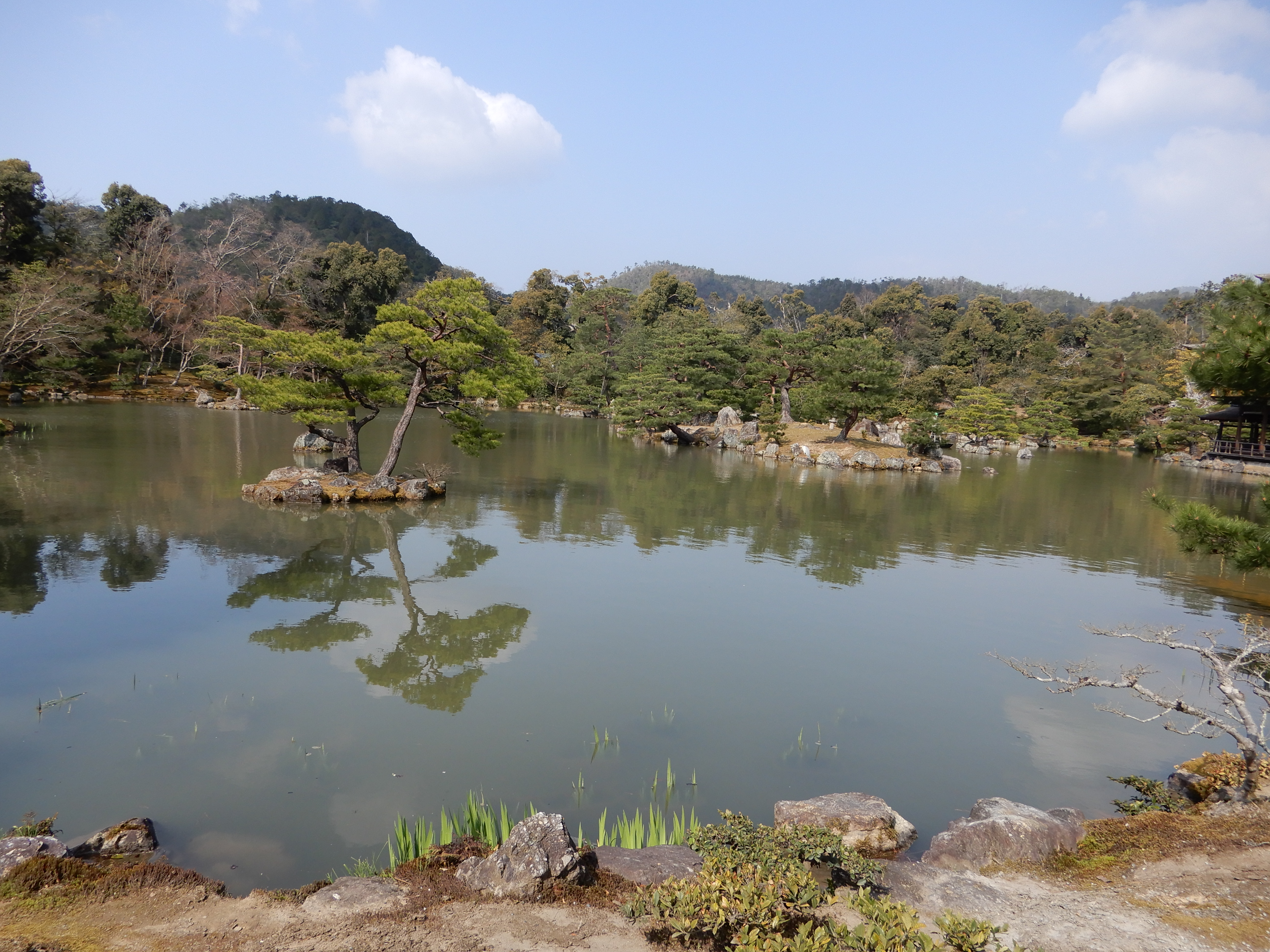 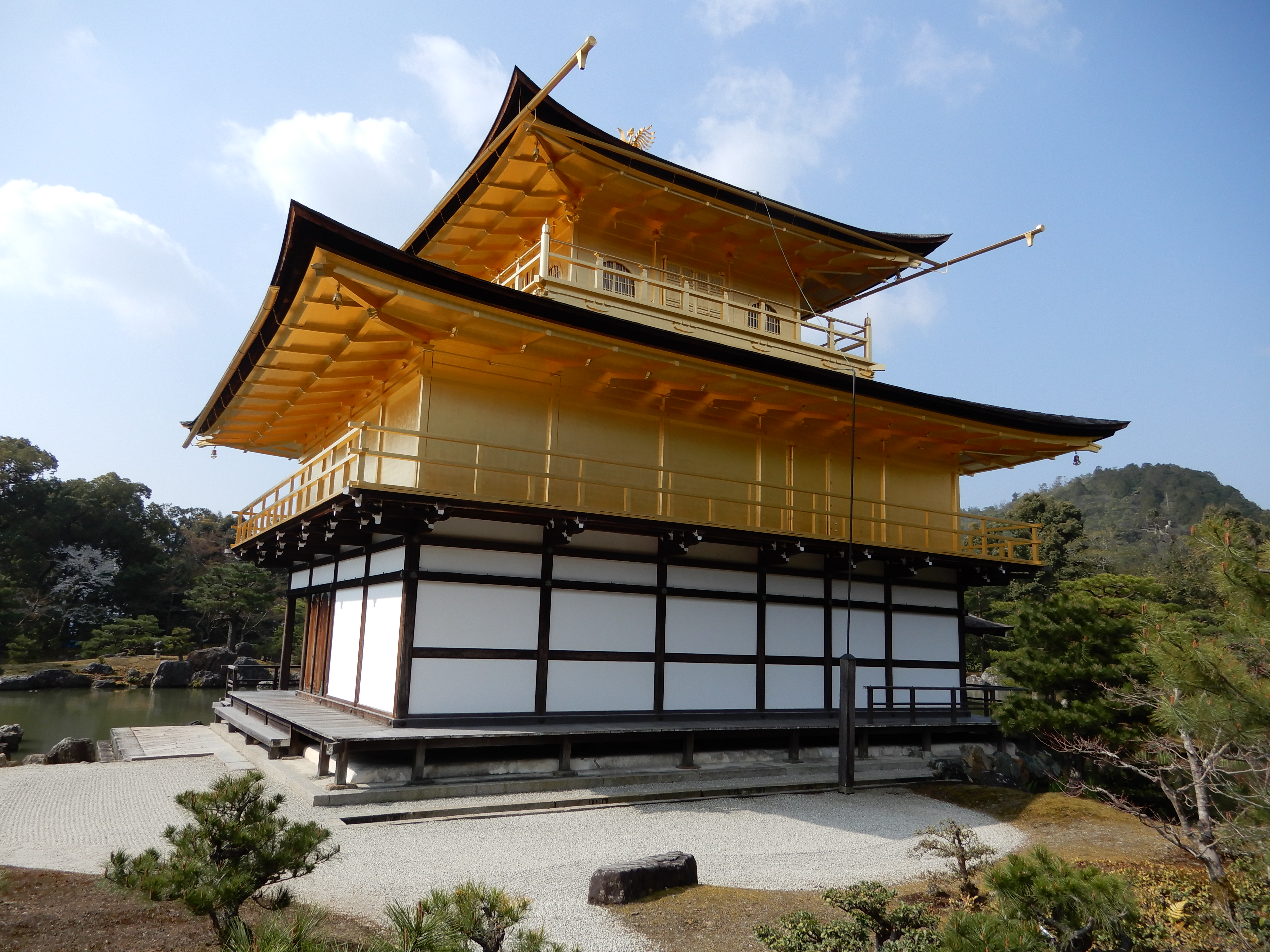 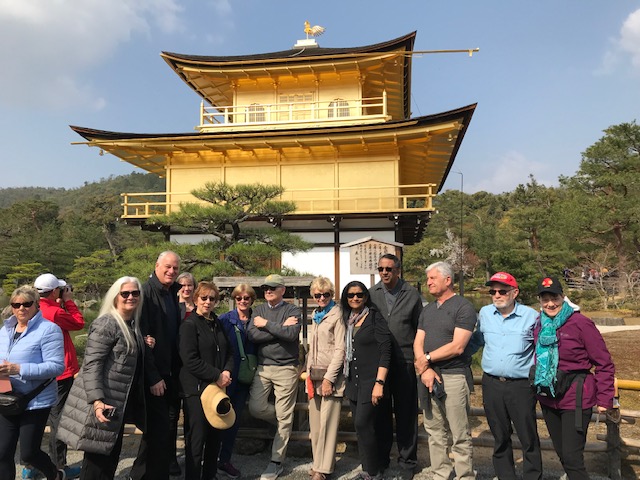 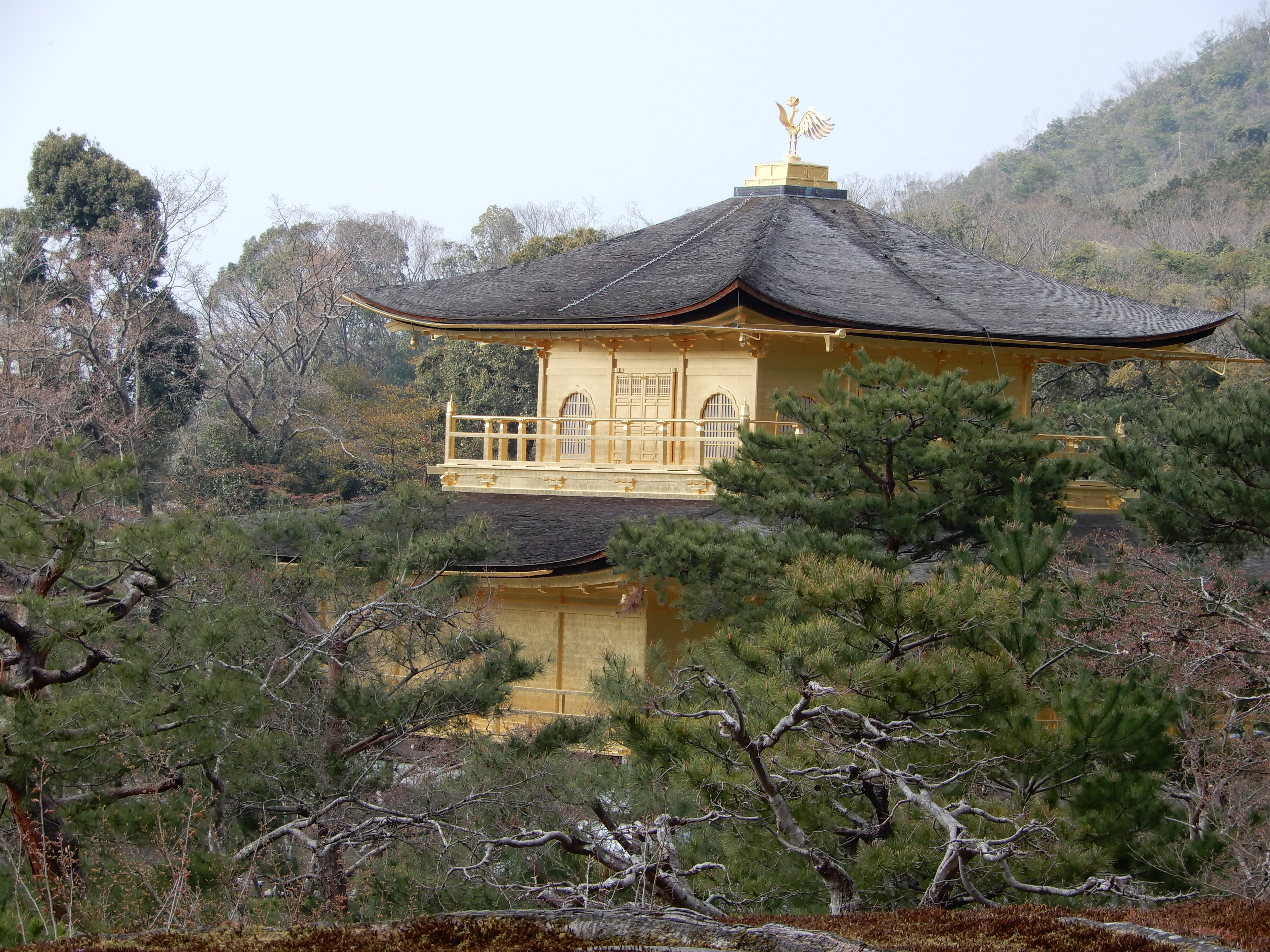 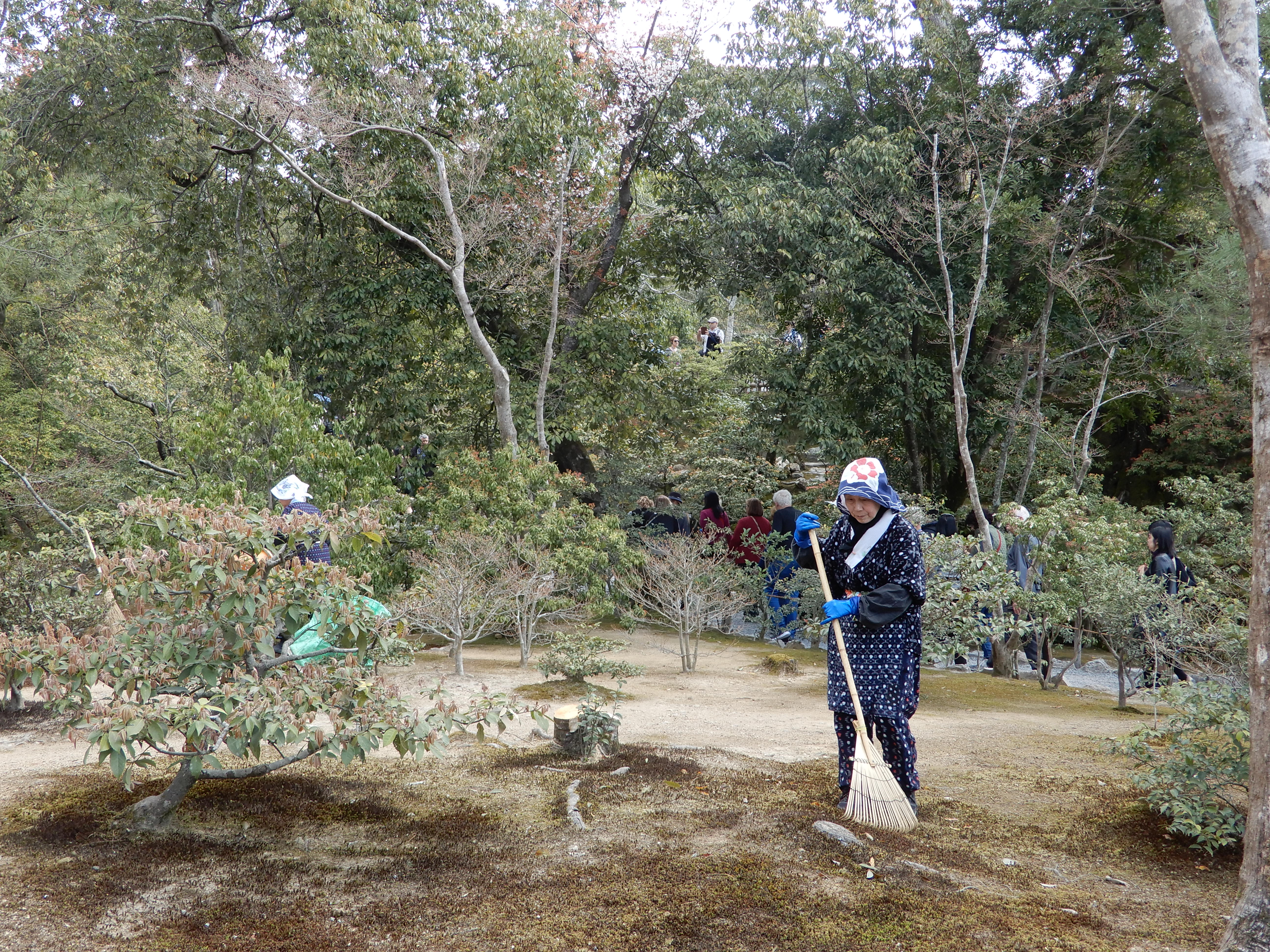 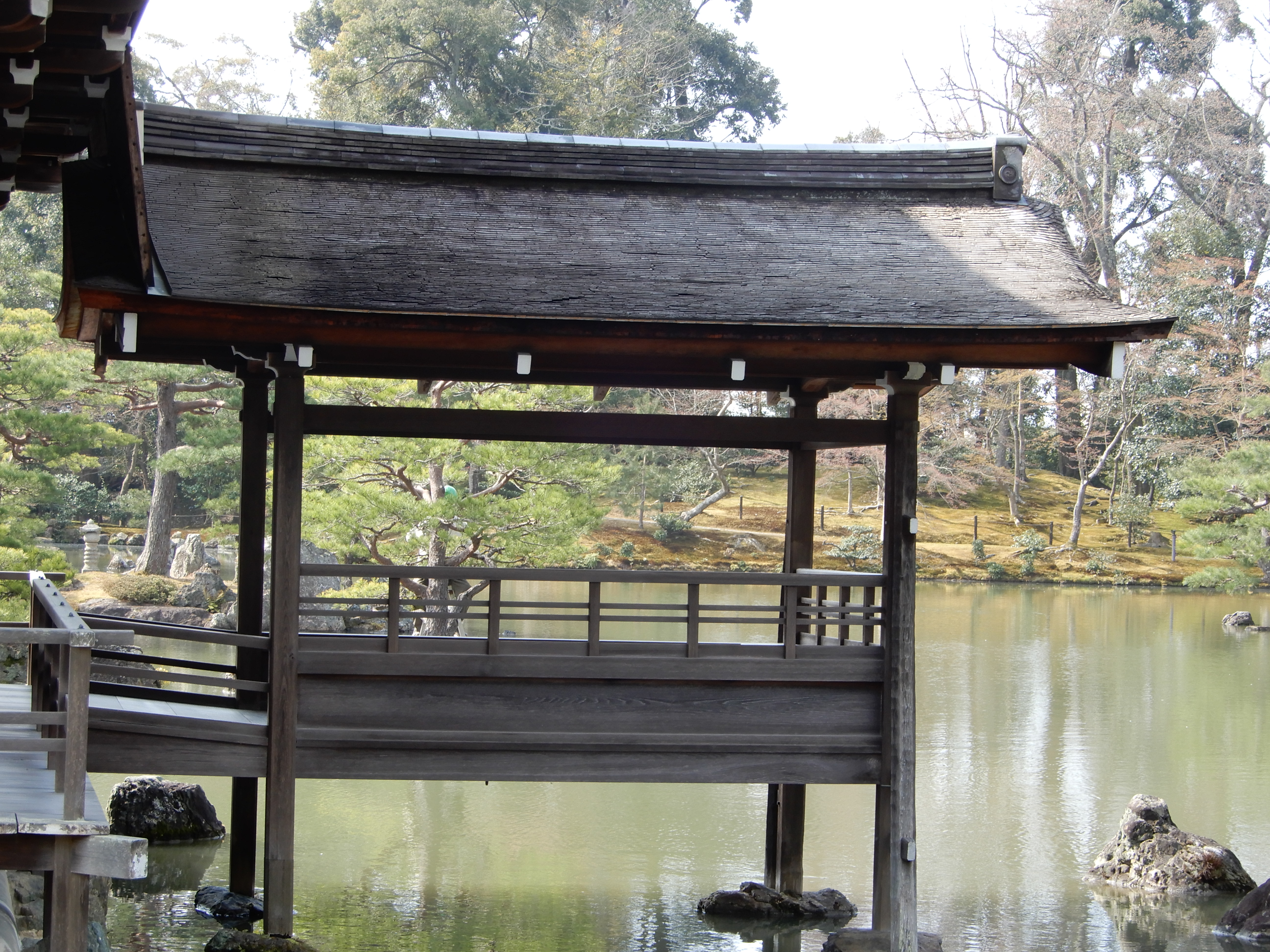 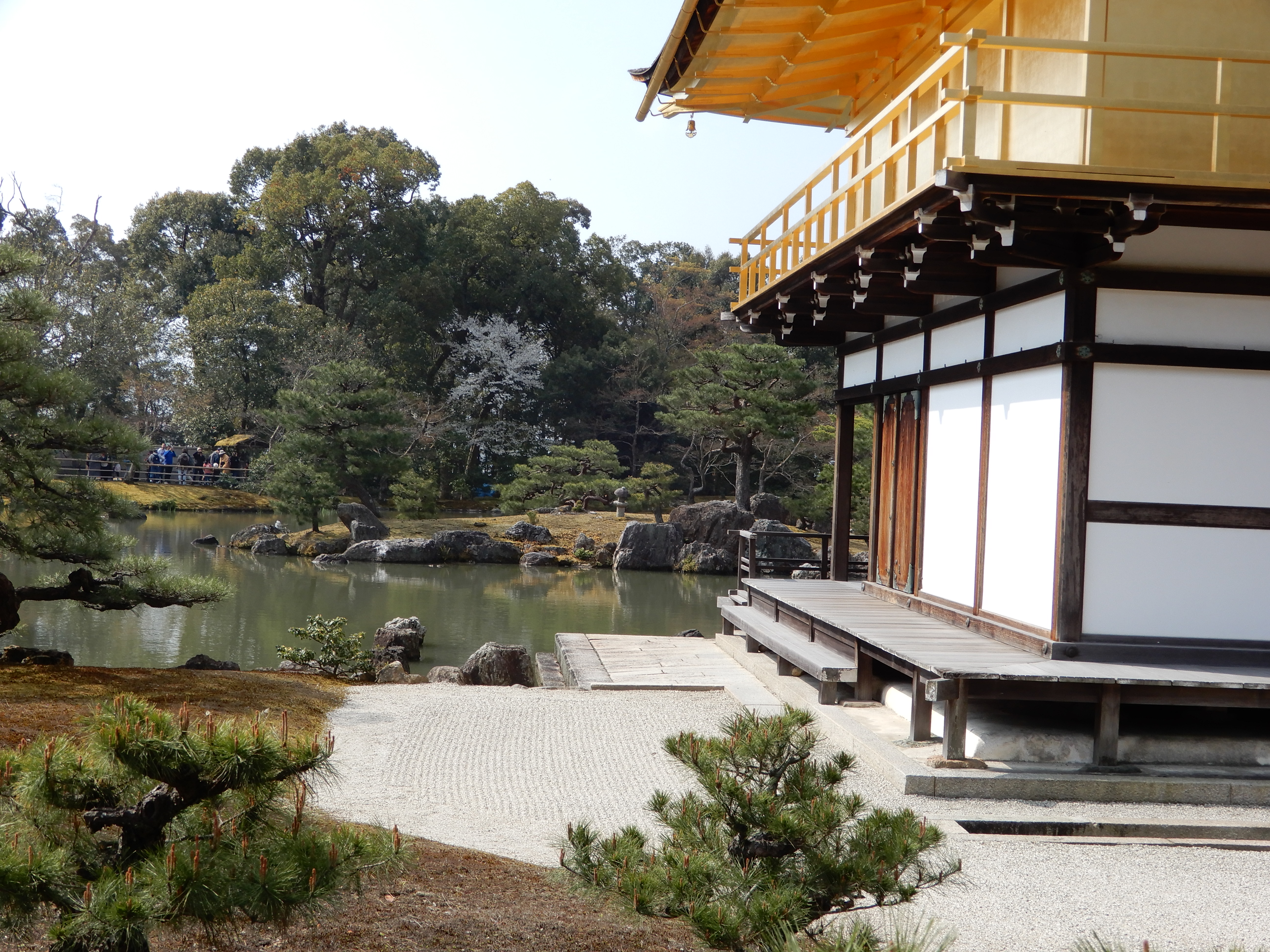 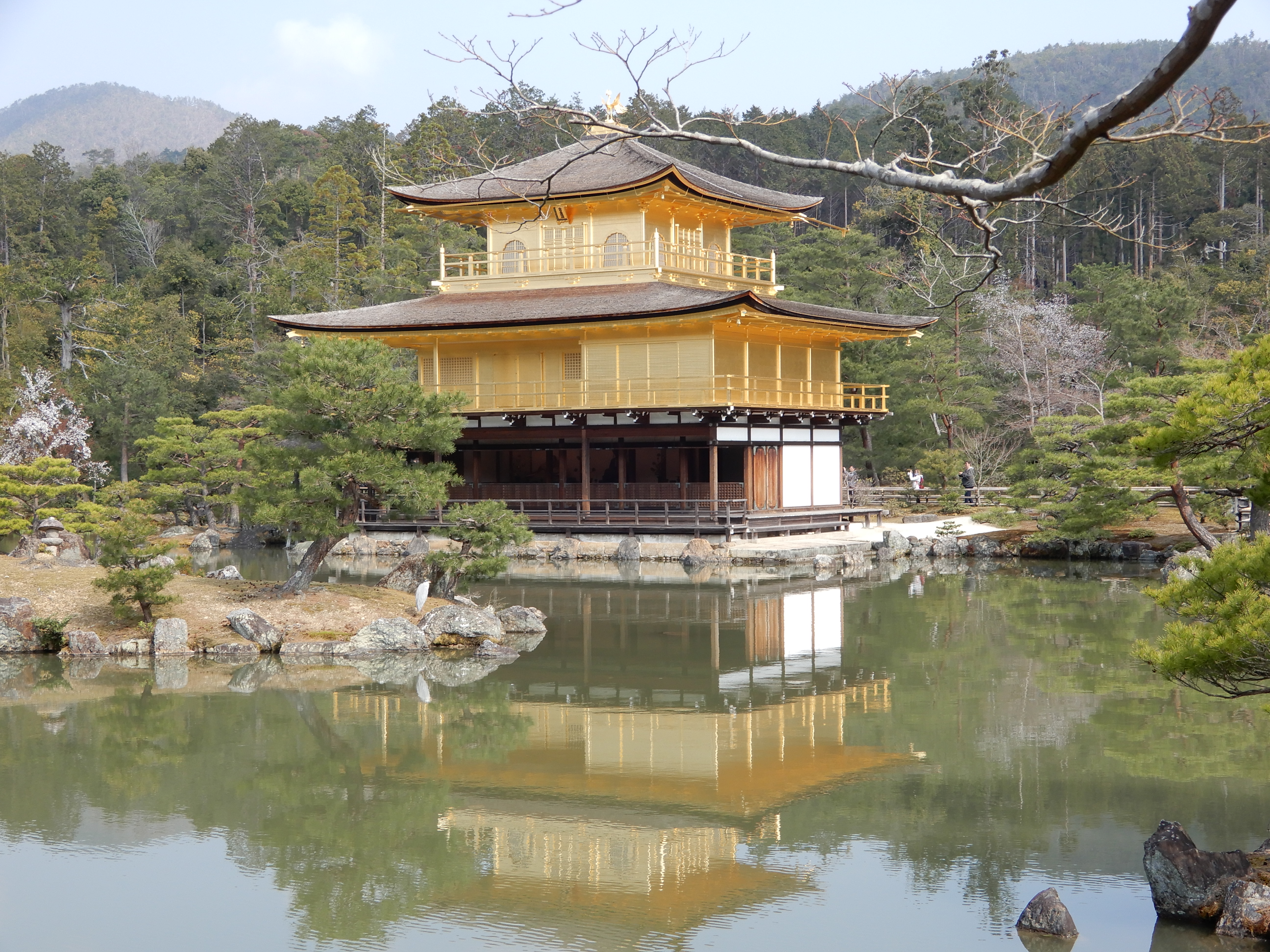 (as always remember to hit the red arrow for more pics, there is a lot of them on this section)

Our next stop was Ryoanji Temple which is famous for its beautiful gardens and very large zen rock garden. This was a much more enjoyable place as it wasn’t nearly as crowded as the first place. I would go to this place again but this time not with a tour so I had more time to actually just sit in the garden to enjoy its beauty and peacefulness. It seemed especially peaceful after the first place we visited. 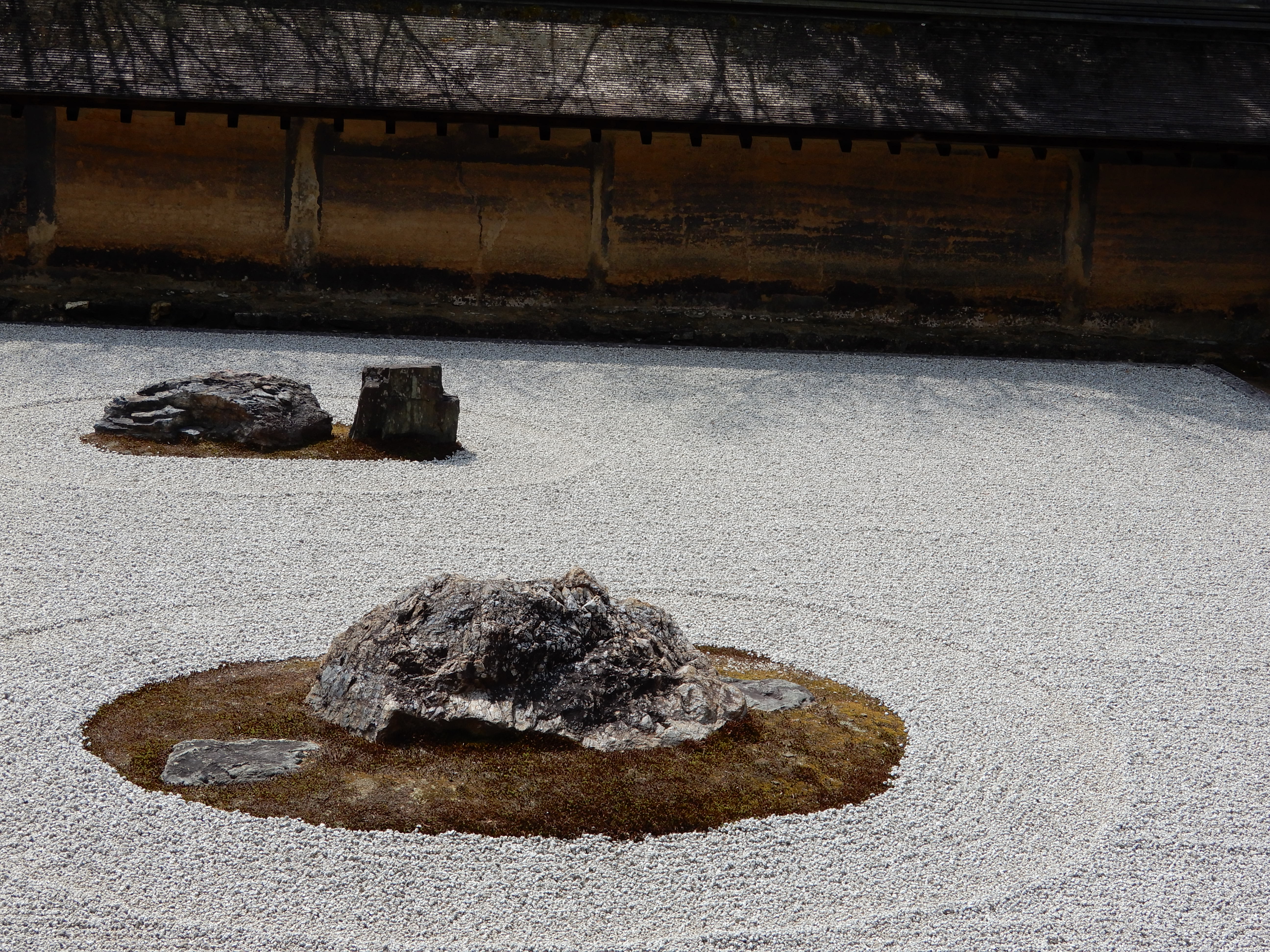 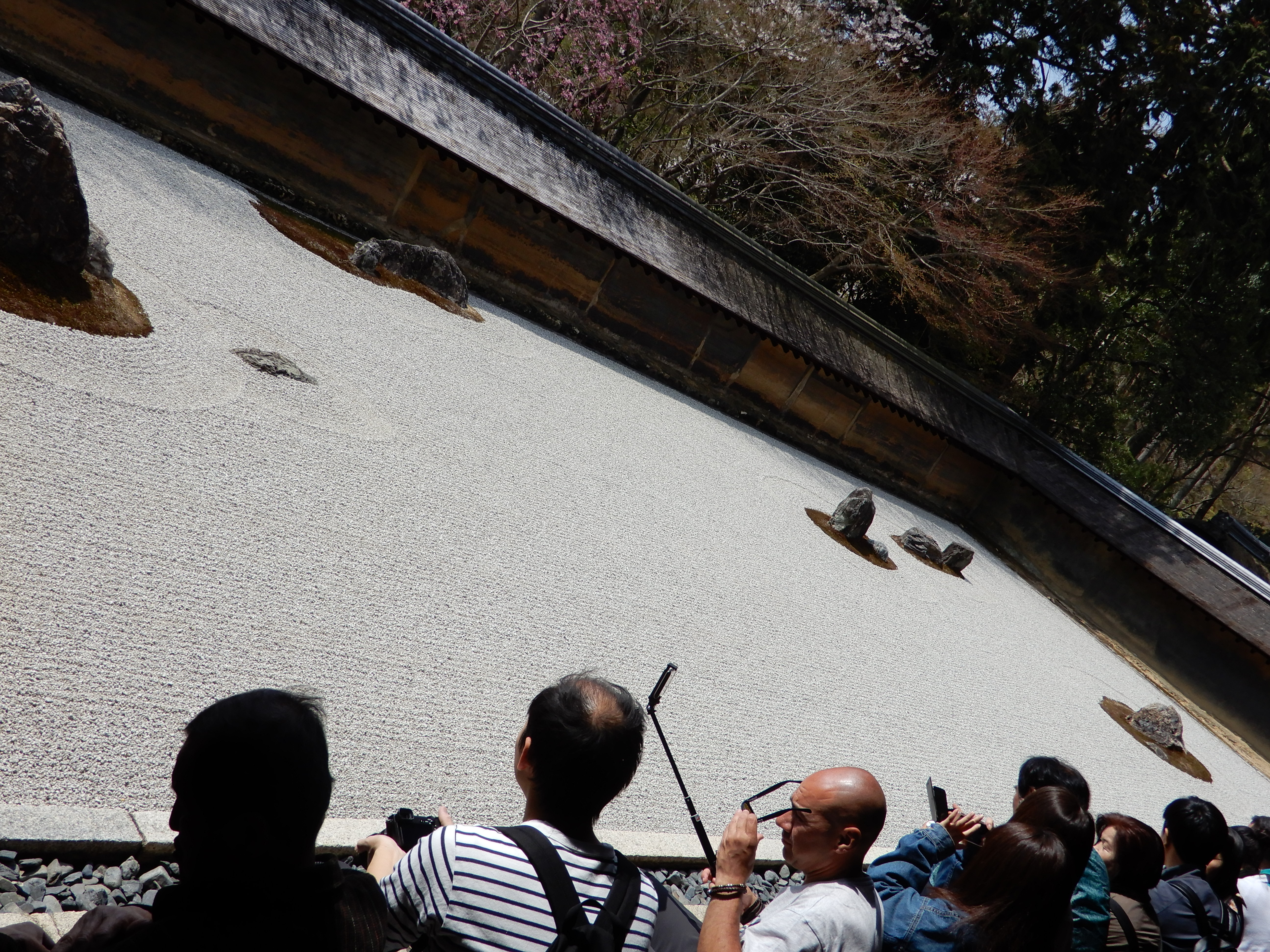 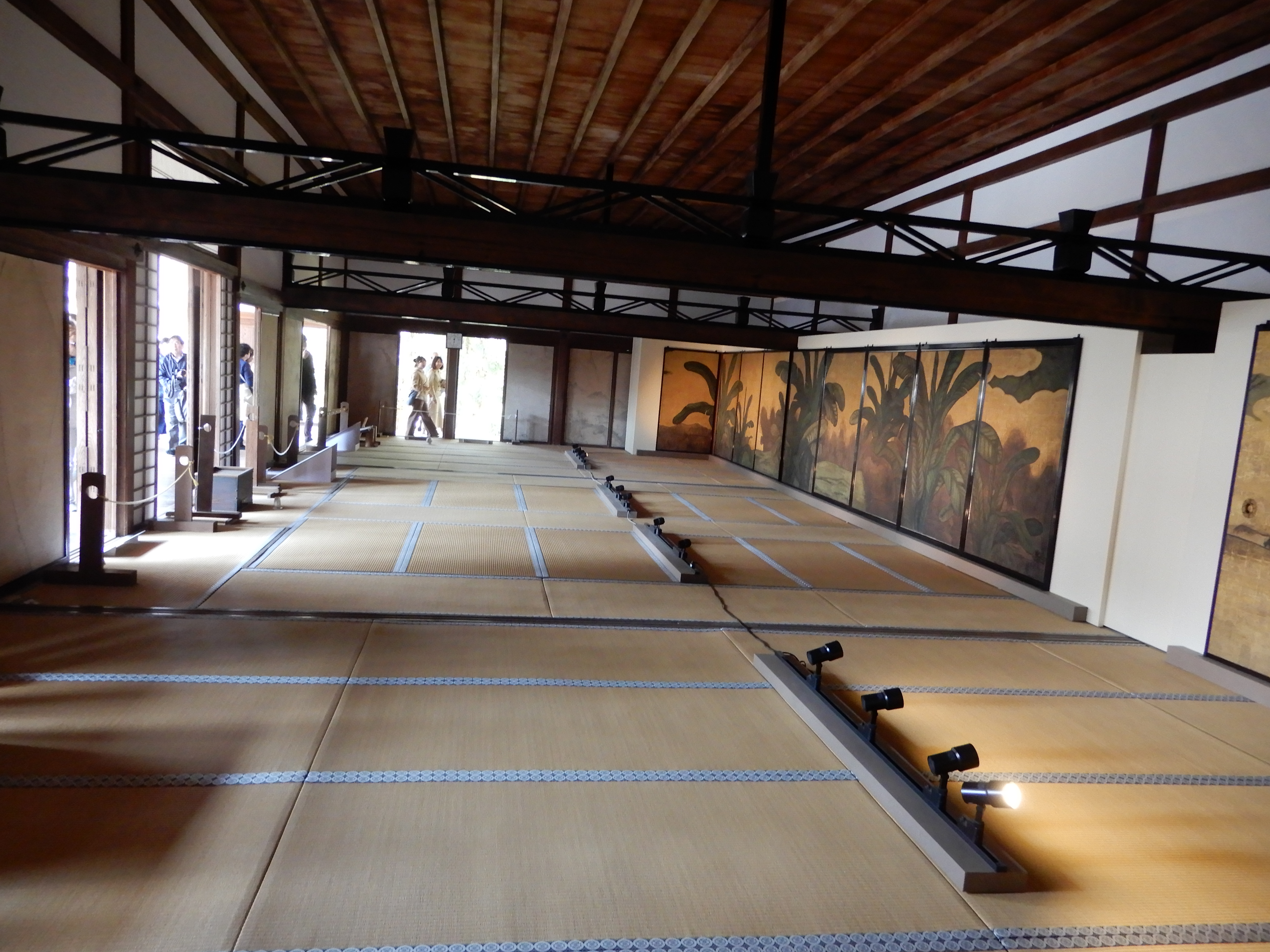 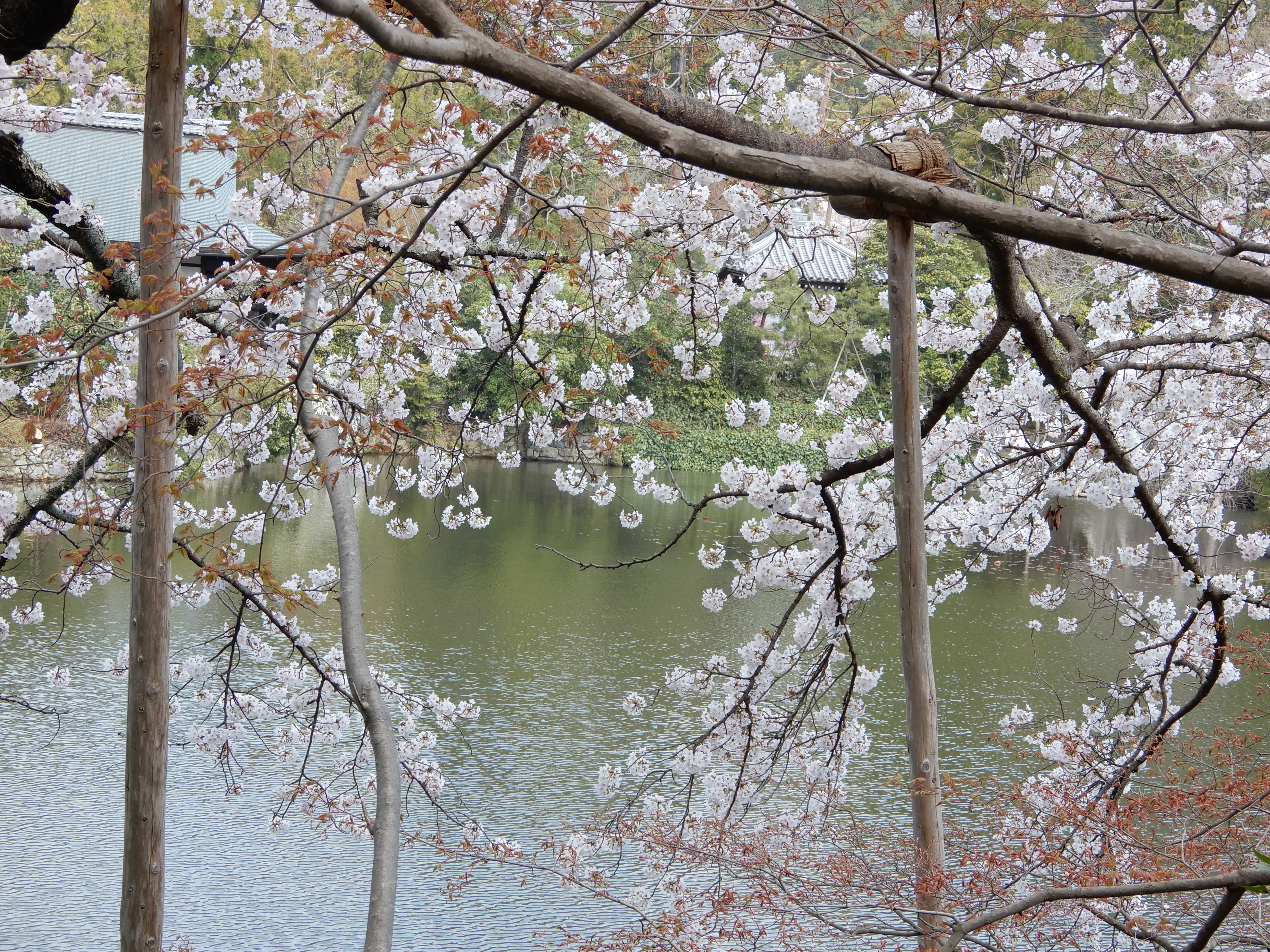 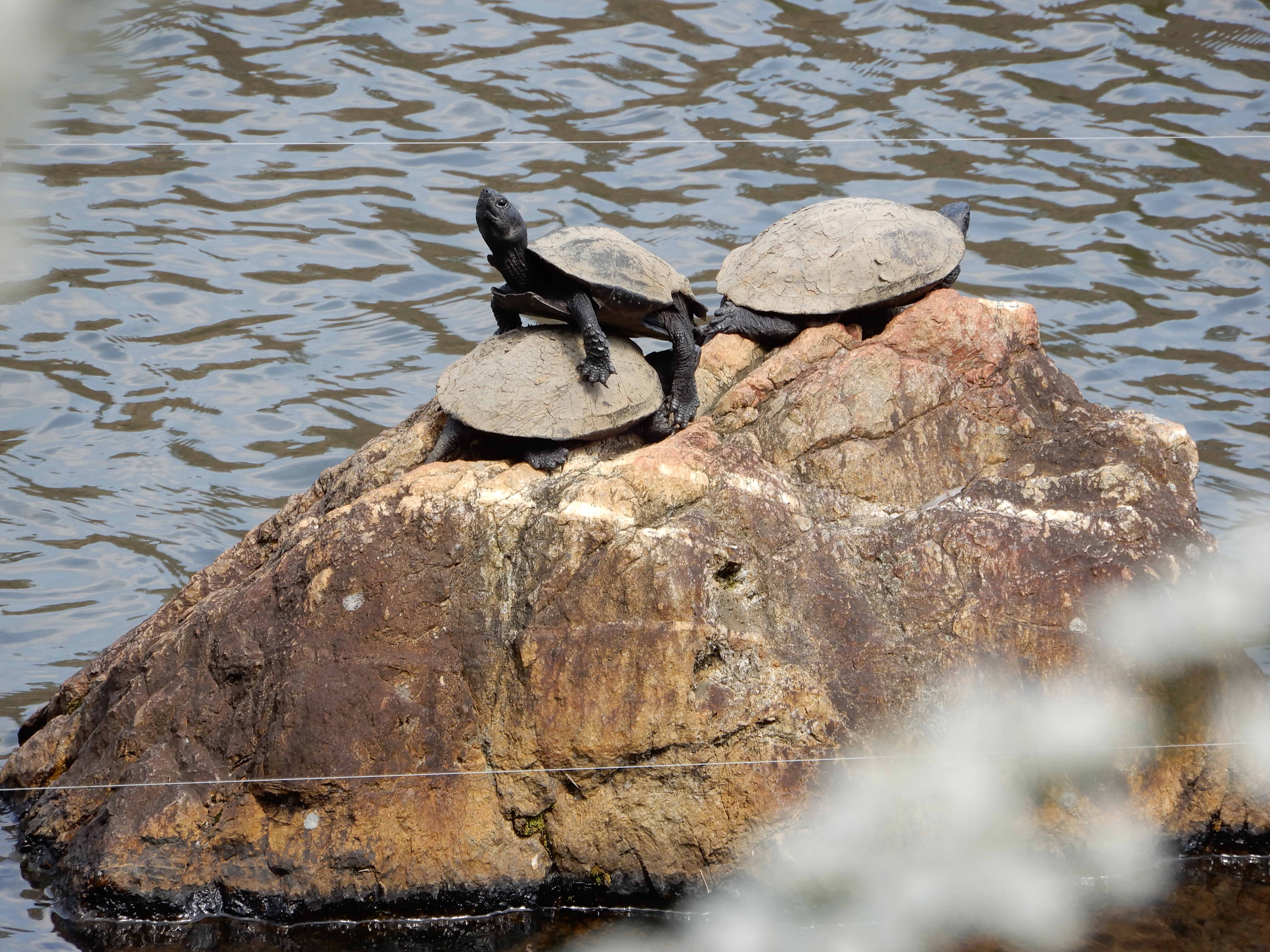 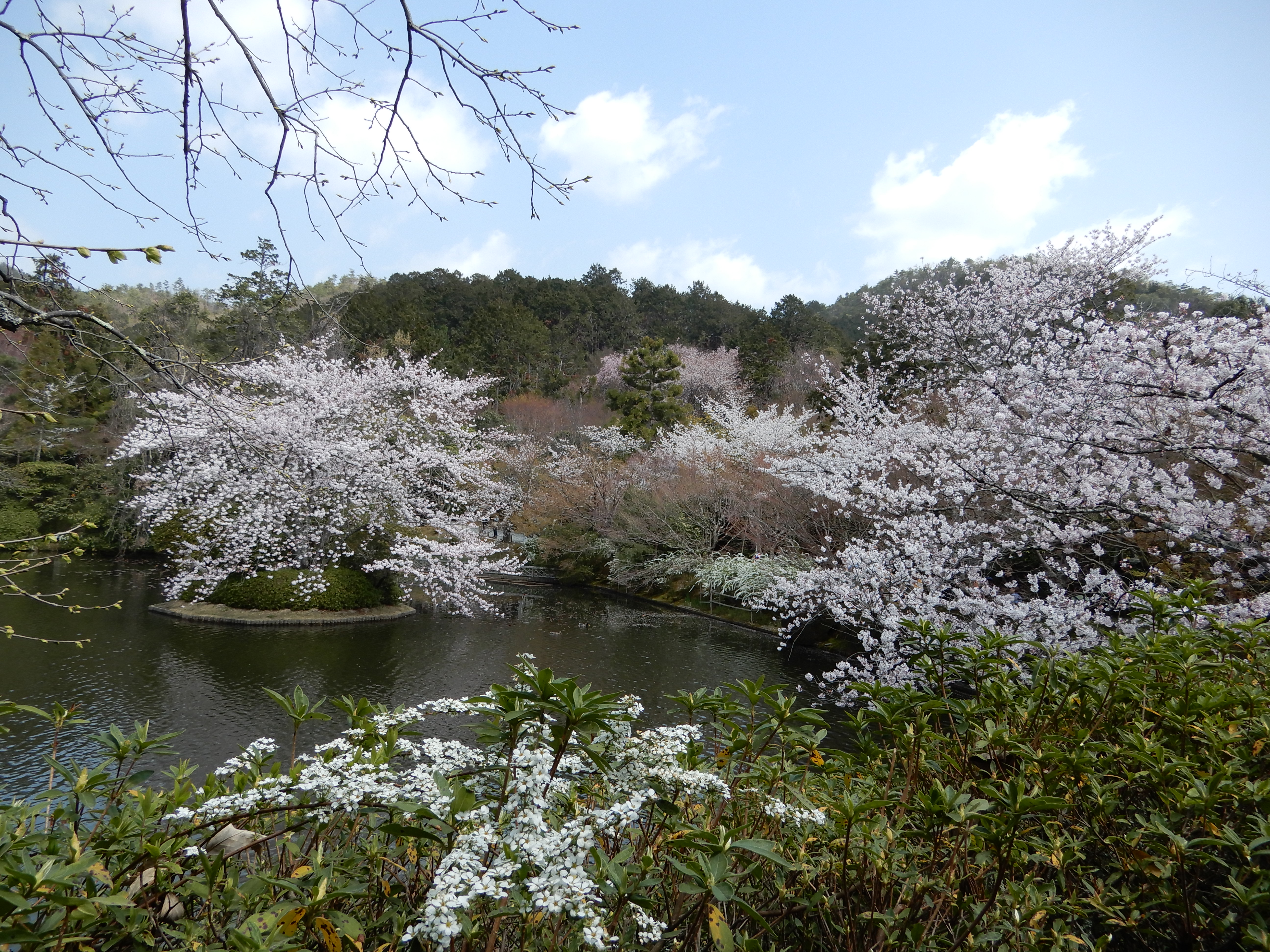 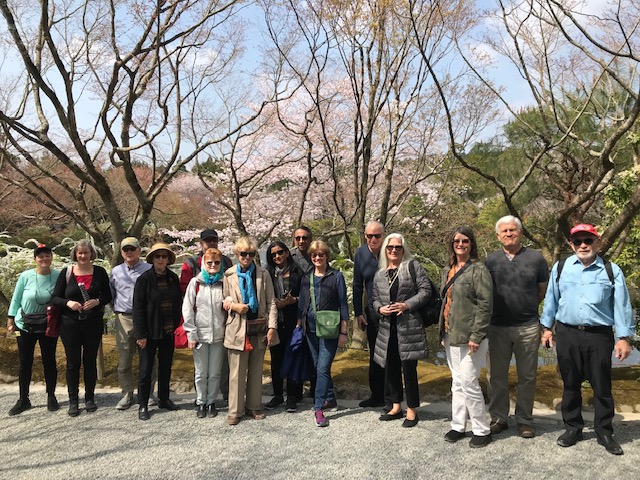 The next stop was a drive to a neighbouring town where we got a lesson in how to make sushi (which was our lunch) and then got to try on traditional kimono. This stop was a lot of fun and one I really enjoyed! Here is what Yoshi had to say about it.

“Then, we rode the bus and went to Kameoka,亀岡, city which is about 16 miles away from Kyoto. We visited Mrs Heki residence which was a samurai house previously. There we had experienced a making of local sushi named Temari sushi 手毬寿司, ball-shaped sushi. Mrs Heki residence was big and old samurai house with a nice garden. Making ball-shaped sushi was very interesting and fun. Two local women, Yoko not Ono and Yumiko were there as helpers. Yoko was very talented to entertain us. We enjoyed making and eating sushi in addition to having local vegetables and fried fish together.  They introduced their daily life. Yoko said that she likes to see Korean & US drama on TV and Yumiko’s daughter likes painting. Actually, the recipe of ball-shaped sushi we use was painted by Yumiko’s daughter. After we succeeded to make ball-shaped sushi, they gave to travellers the certificate of Sushi Ambassador. Now travellers can open ball-shaped sushi restaurants in your home town or have a sushi party in your home. After enjoying sushi, Mrs Heki had prepared kimonos for us to wear. It was fun to wear kimono and to see travellers wearing kimono. On the way back as well as going to, We could see paddy field for rice planting from highway and bamboo in Kameoka.” 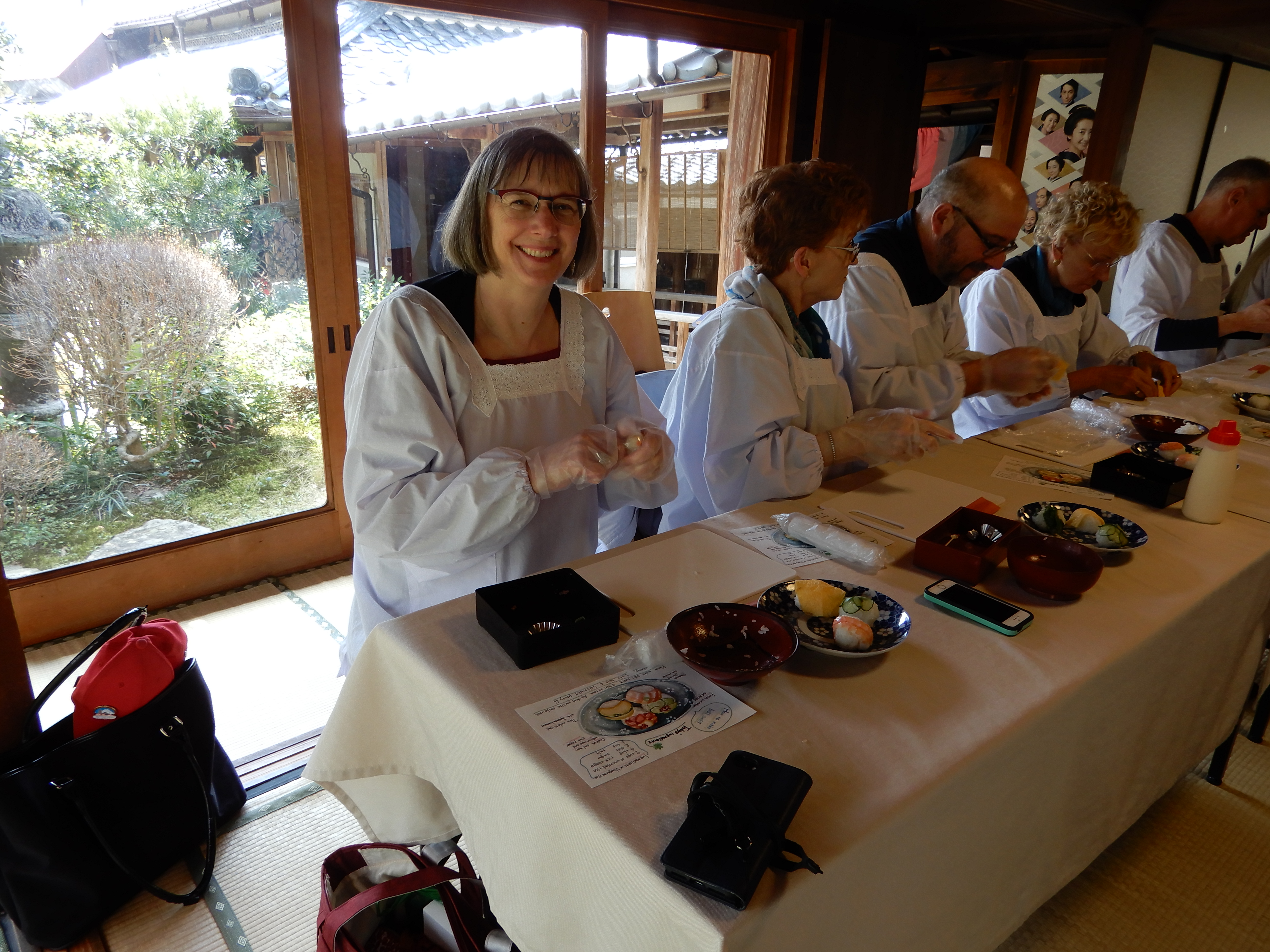 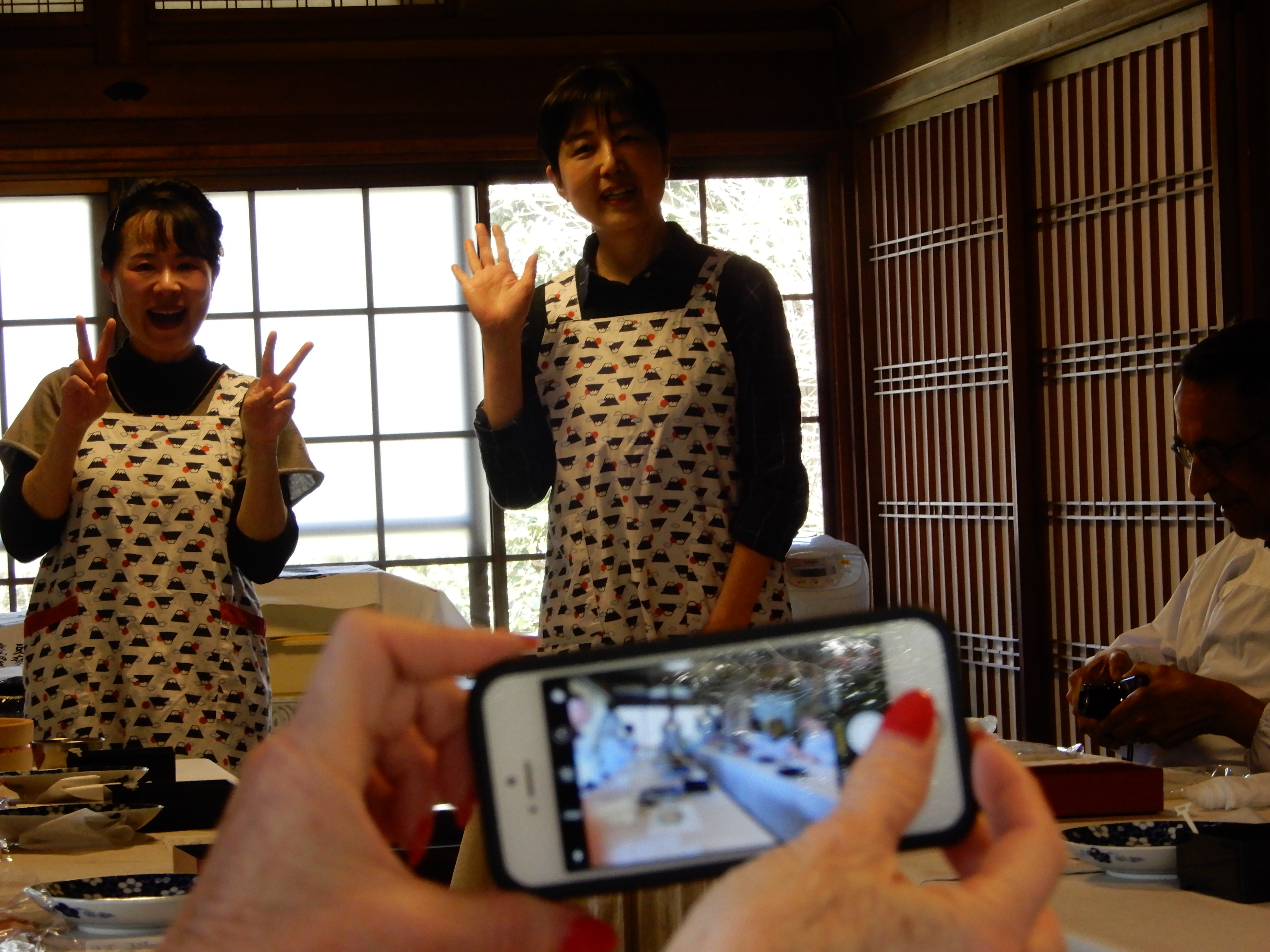 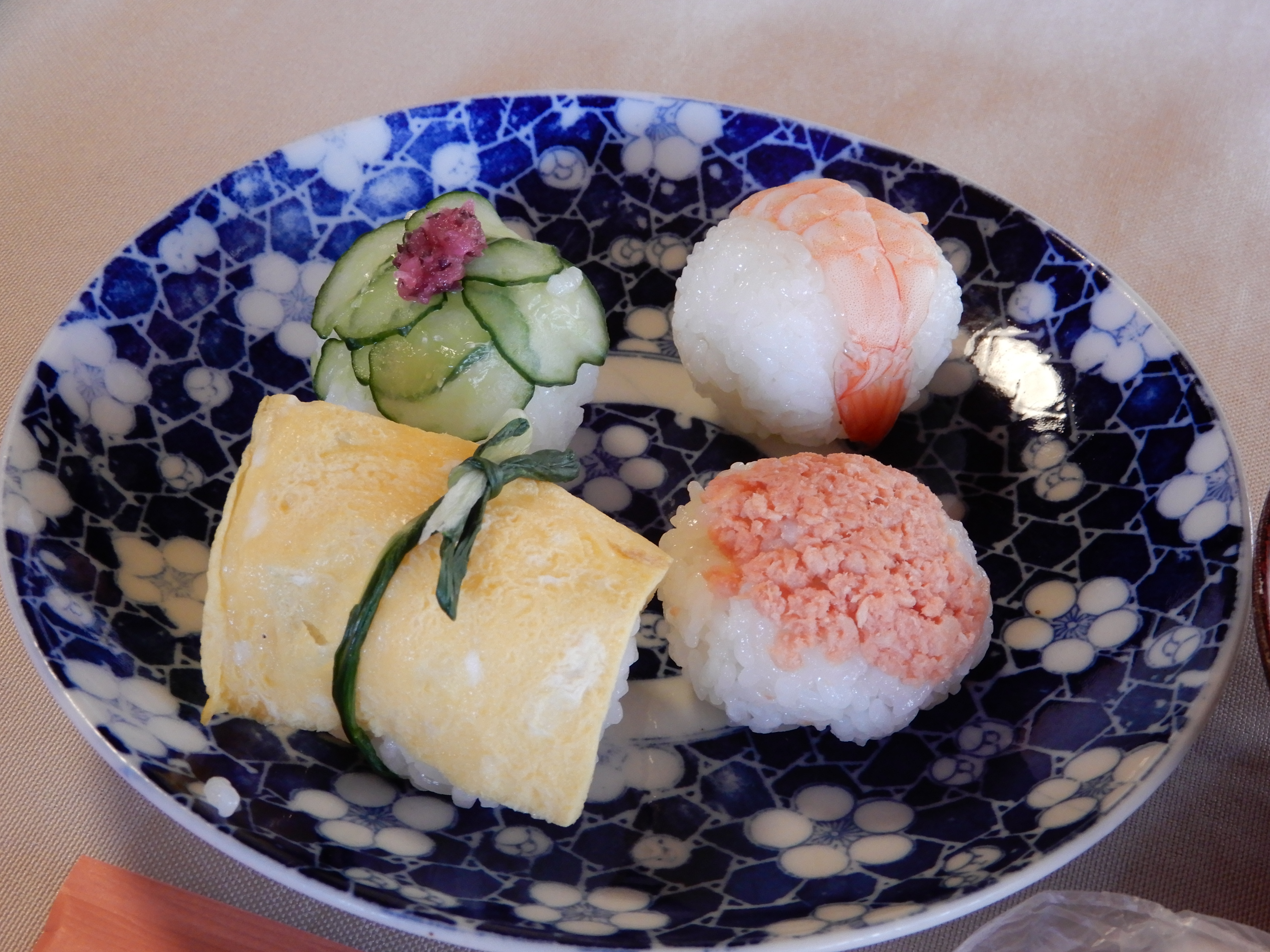 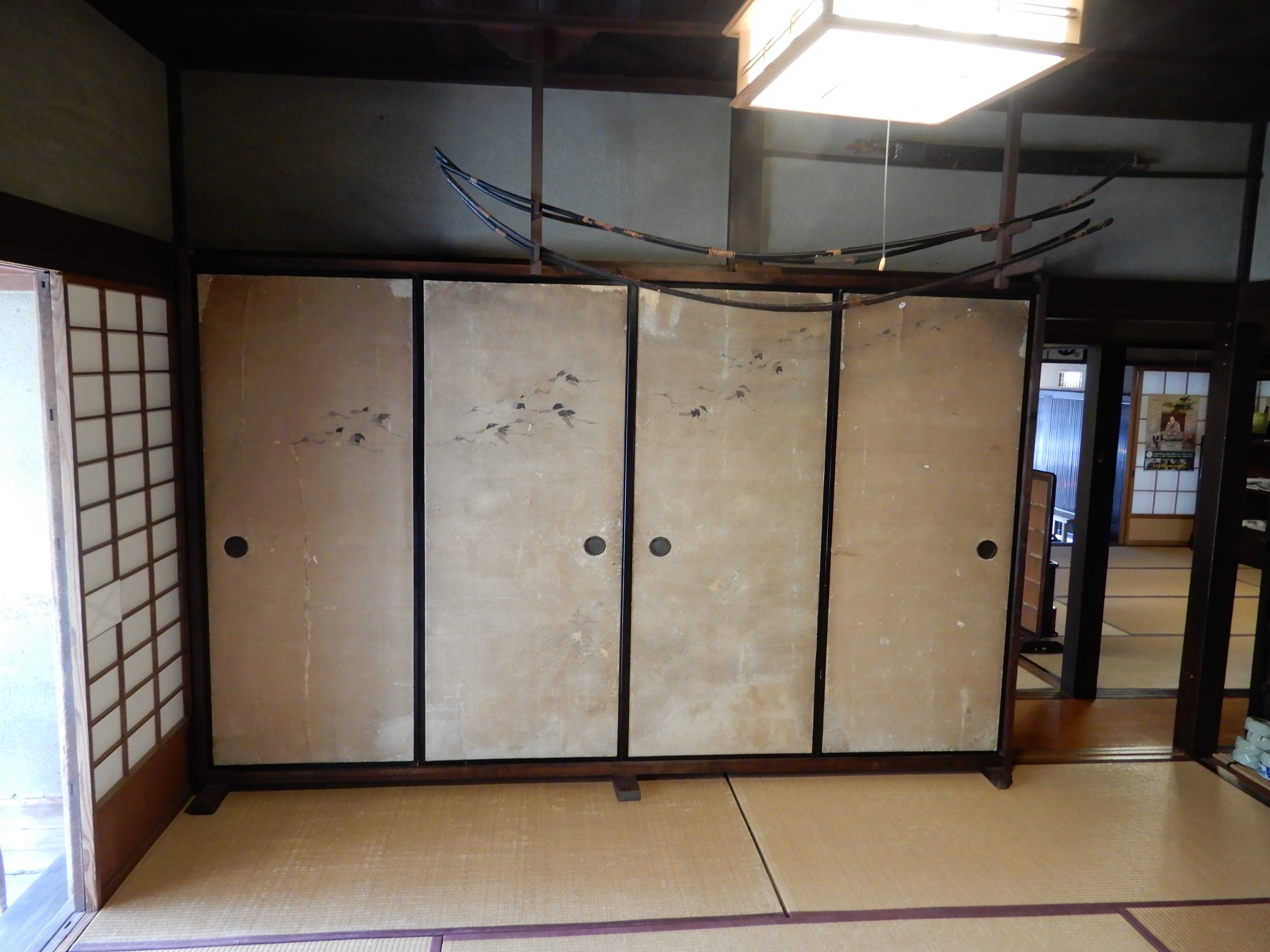 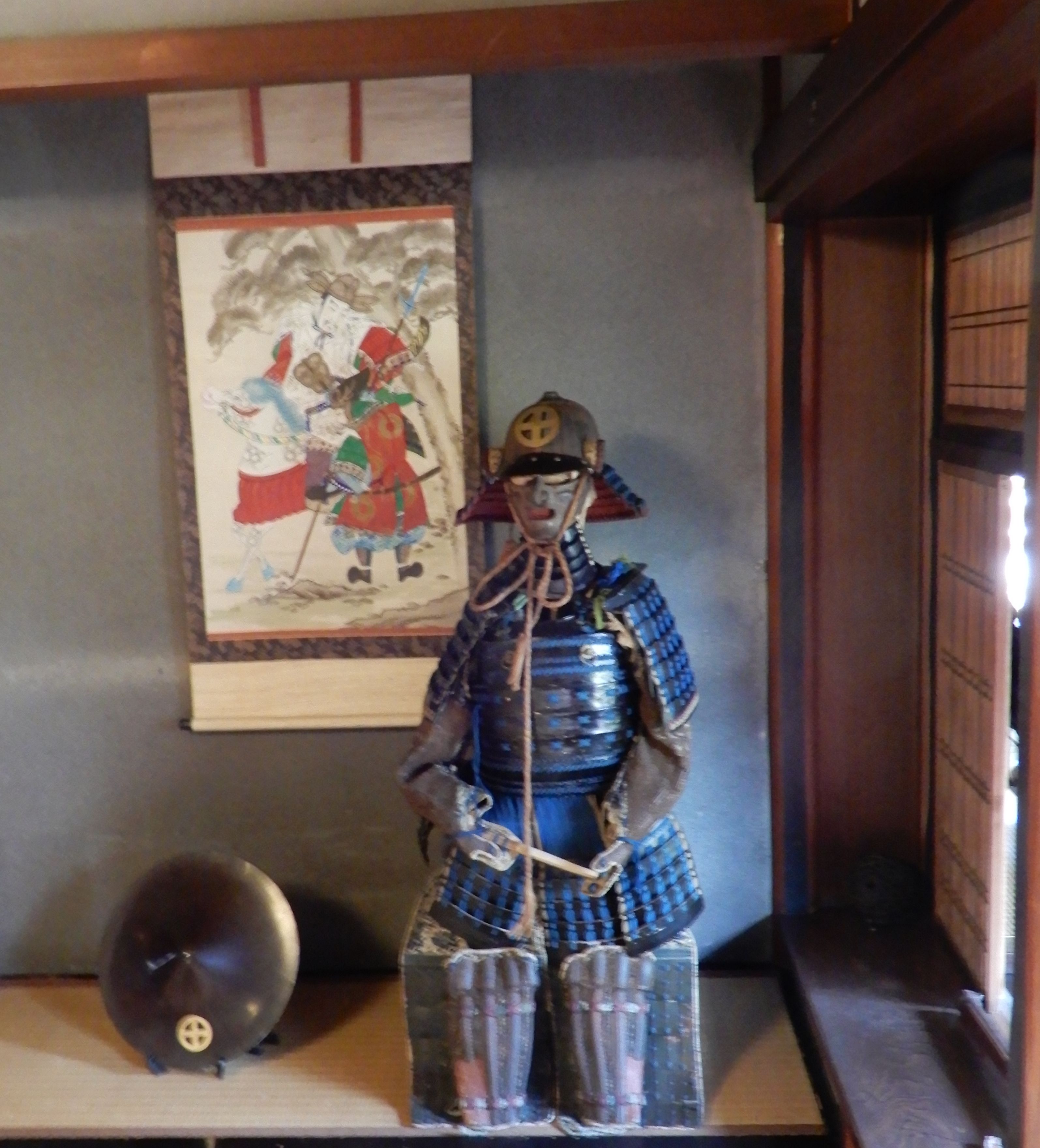 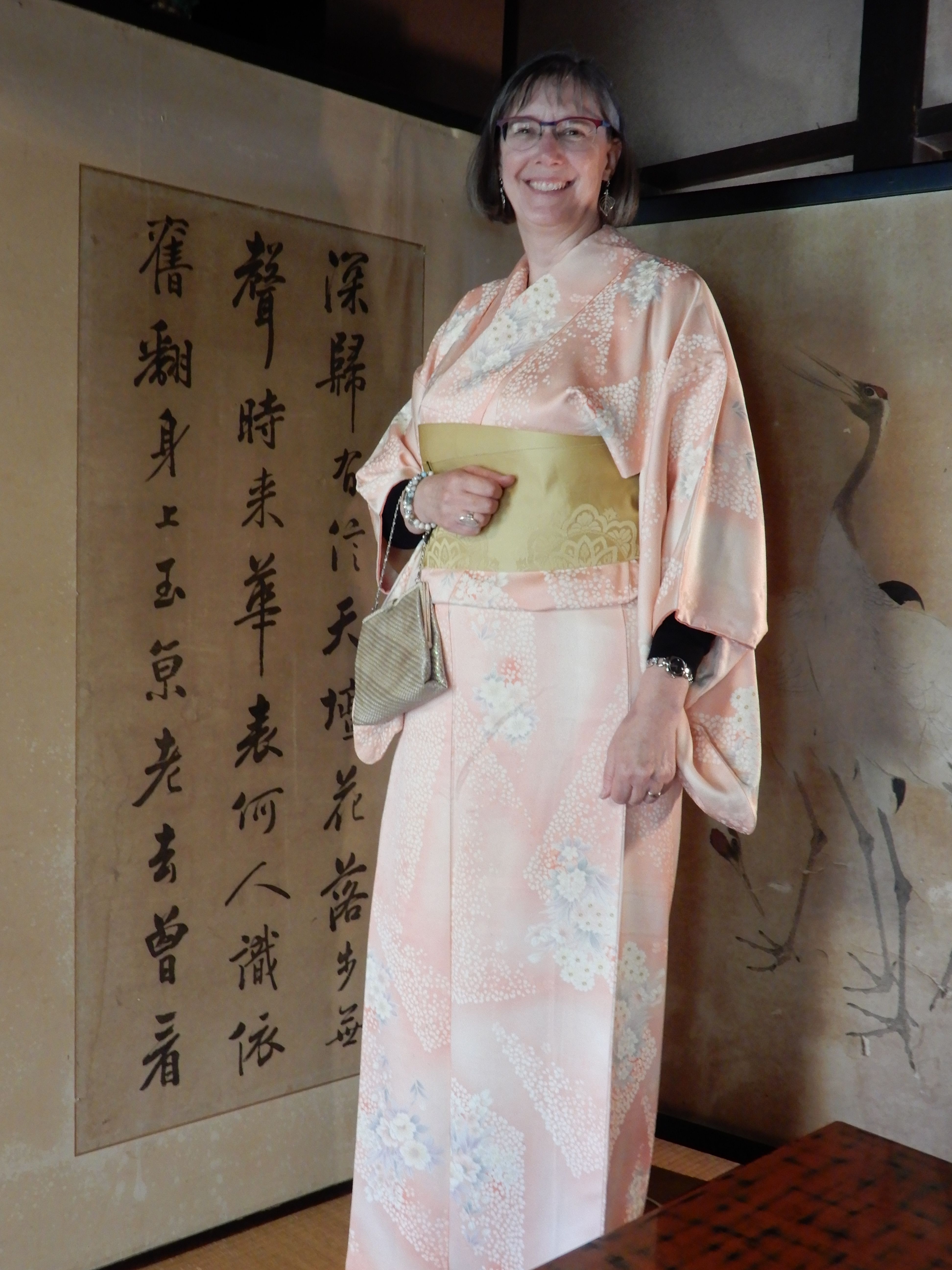 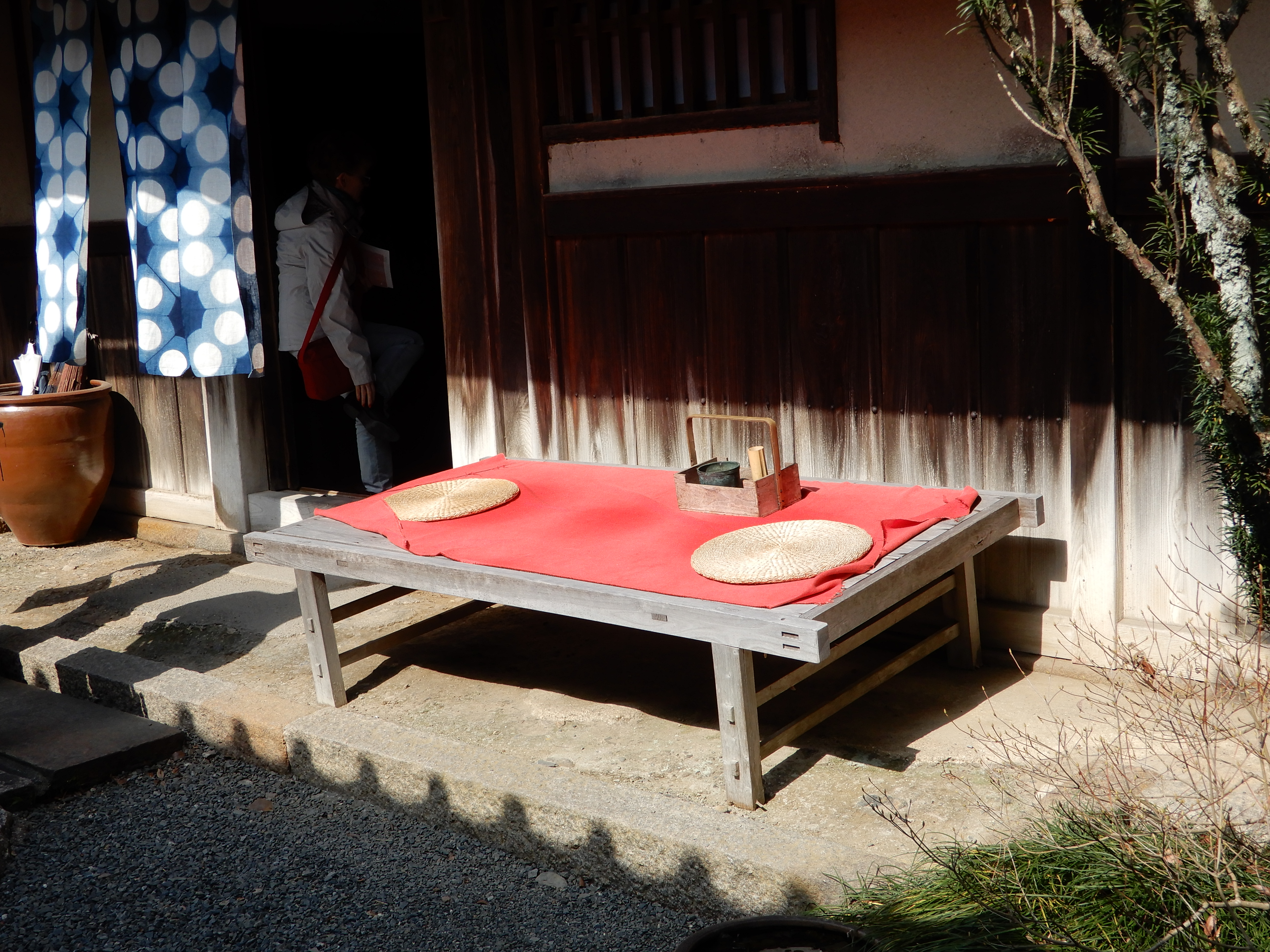 After lunch, we headed back to our hotel. Some of the group ventured to the Philosopher’s path to go walking however I had walked that path the last time I was in Kyoto. Granted there were no cherry blossoms then however I just wanted a bit of downtime. After a couple of hours, Karen (who had decided she needed a nap also) decided to hit the shopping arcade across the street and we had a wonderful few hours checking out the different shops and had an early dinner there as well. The interesting thing about Japanese Shopping arcades is that you quite often have shrines or temples right in the arcade itself. Such was the case in the one Karen and I was shopping in. 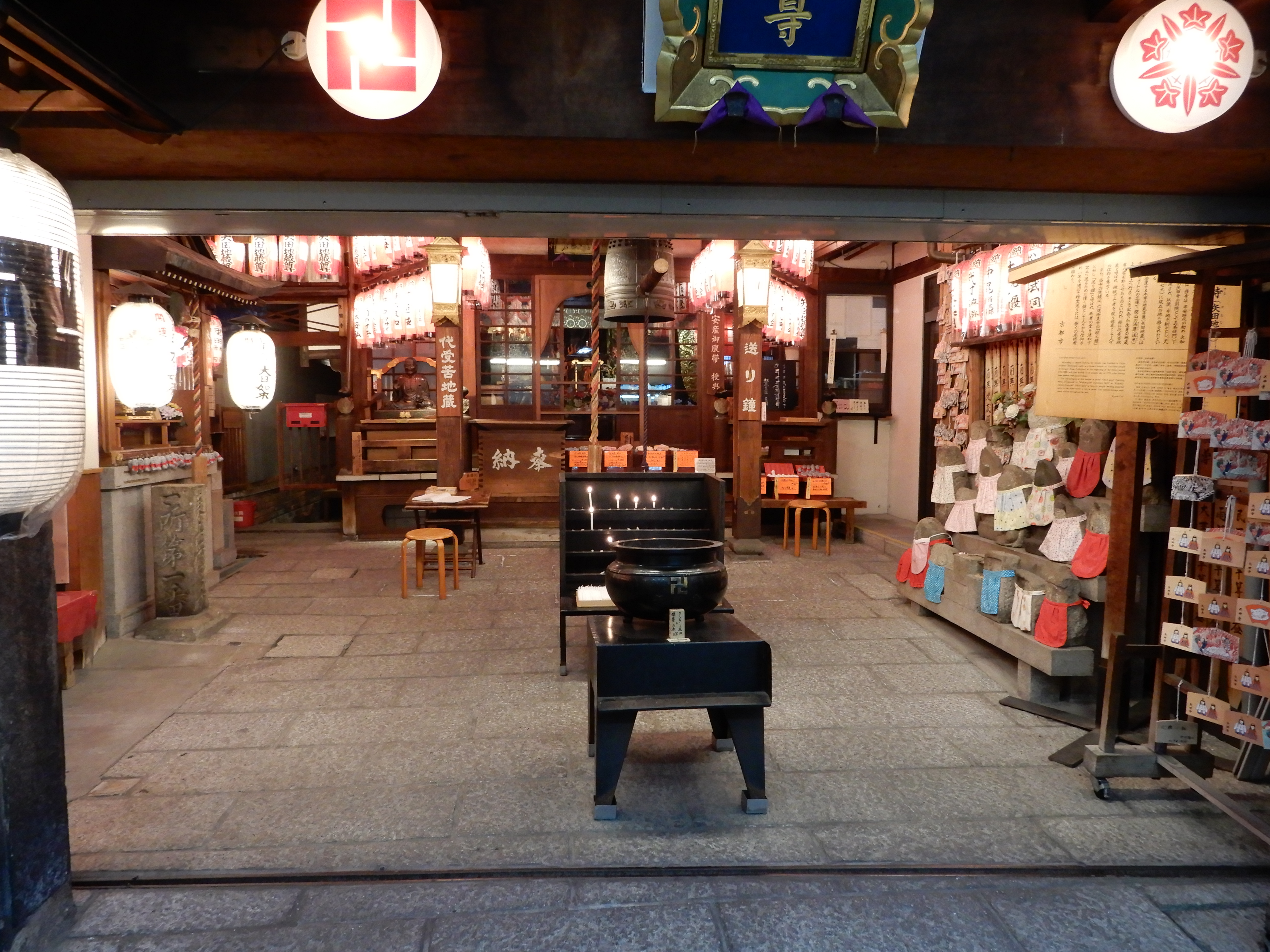 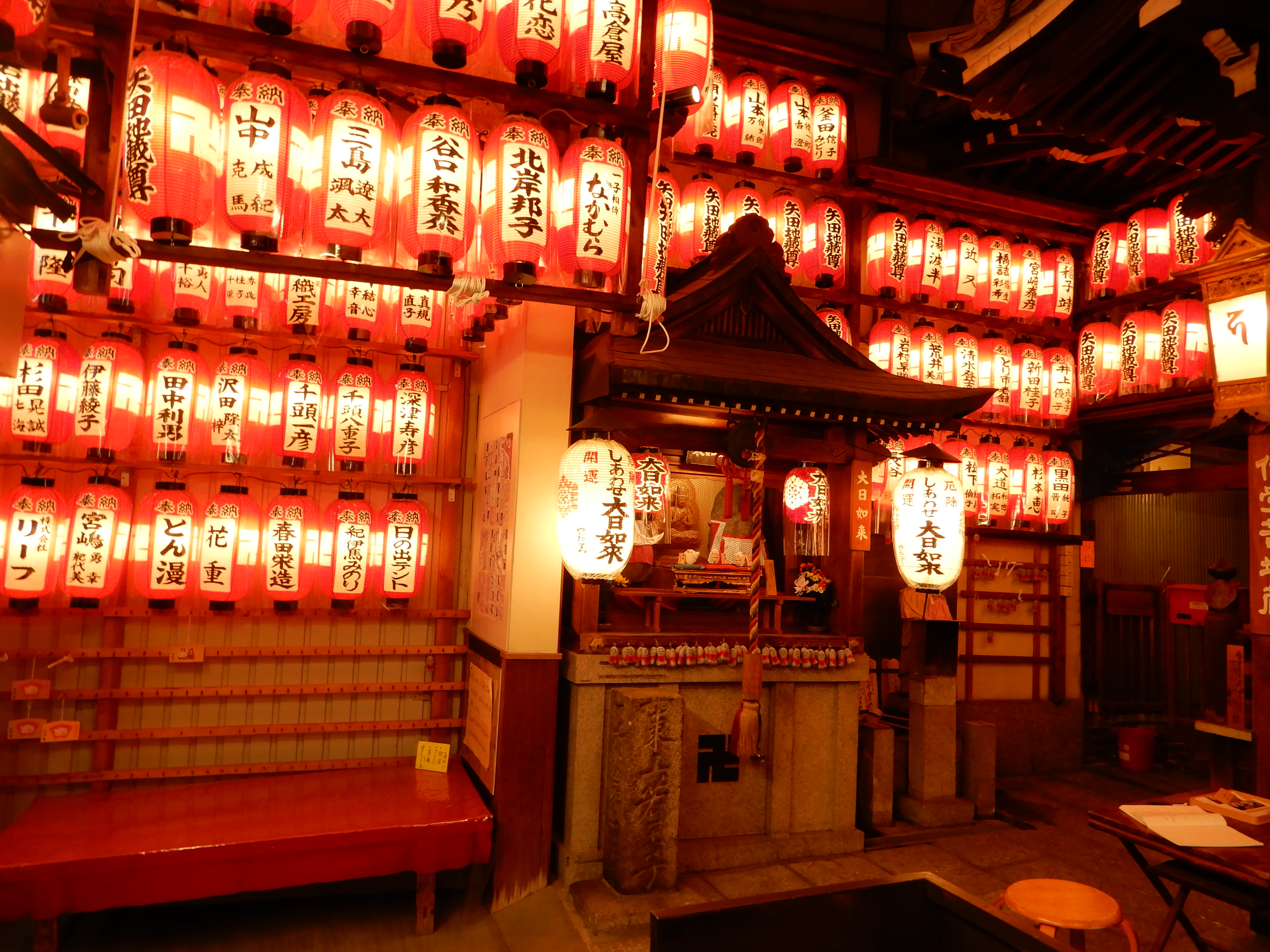 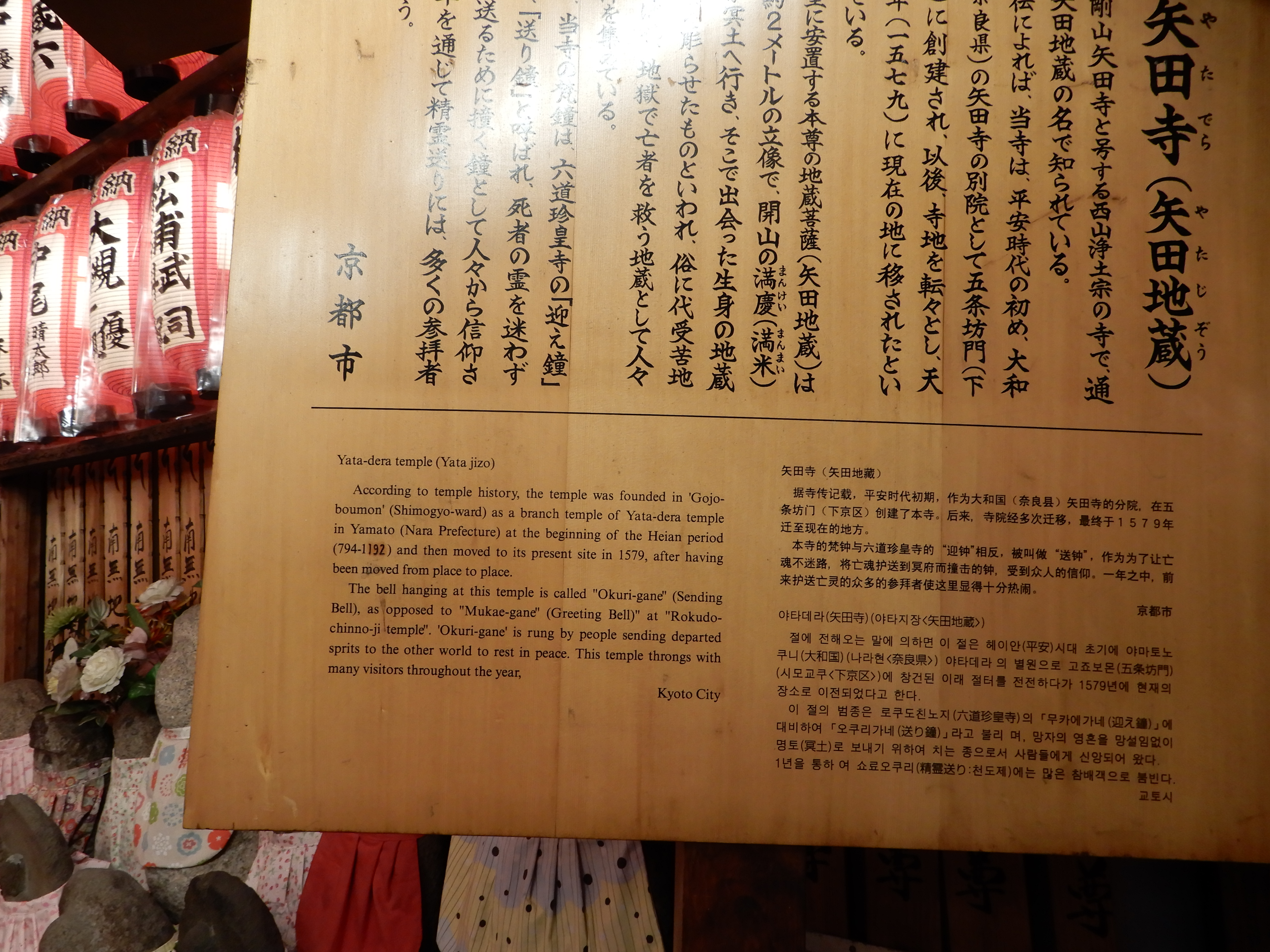 Here is a picture of Yoshi our guide, I think this was taken outside Mrs Heki’s house. Yoshi was an architect and project manager who worked for a company in Japan that sent him to the USA to work on several projects there. He is now retired and works guiding tours part-time for Overseas Adventure Travels.

I am one happy customer as thanks to Janice, Sunshine Studio owner, the quilt top I struggled with, turned out END_OF_DOCUMENT_TOKEN_TO_BE_REPLACED

I have recently had the pleasure of meeting Janice Symonds of the Victoria Sunshine Studio. I had 3 quilt tops END_OF_DOCUMENT_TOKEN_TO_BE_REPLACED